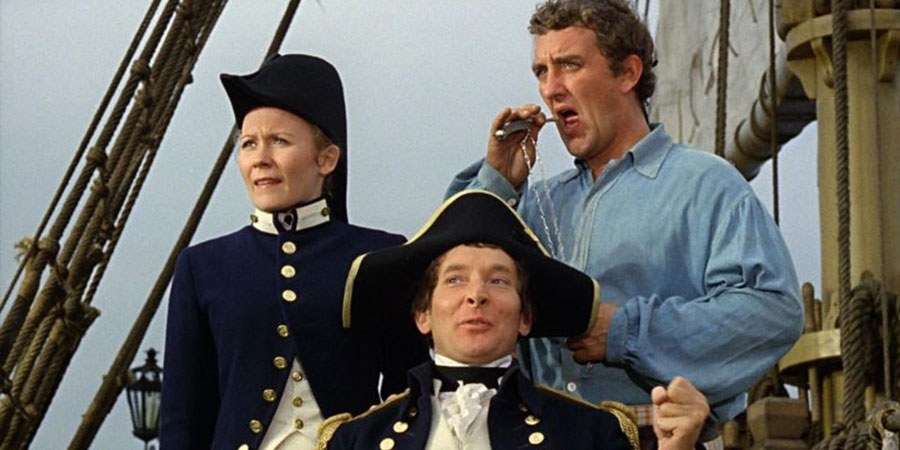 Costume comedy with the Carry On team. A young serving wench in search of her captive boyfriend disguises herself on board the good ship Venus

Britain is at war with Spain. In need of ever more sailors to man her ships, the Royal Navy are press-ganging along the south coast, whilst Albert Poop-Decker, a student at the Royal Naval Academy, is hurried into service aboard HMS Venus despite having failed to graduate the one-year course for eight-and-a-half years in a row!

Hurrying to Plymouth, the naïve and newly endowed Midshipman Poop-Decker finds the Venus empty. Searching for his new crew-mates in order to report for duty, he is seduced by Sally, waitress in nearby tavern Dirty Dick's. But her motives are certainly not sensual; she knocks him out, steals his clothes and assumes his name, hoping to go to Spain and be reunited with her long-lost love, Roger.

Waking up in a daze and without any papers to prove his identity, Albert finds himself quickly out cold again; press-ganged and brought aboard the very ship on which he was due to serve - albeit now much lower in the ranks!

The Venus's First Officer and Bosun don't take kindly to Albert, which is only exacerbated when he claims to be the rightful Midshipman Poop-Decker: someone who, along with new captain, Fearless, they're not that fond of either. There's something not quite right about the new Midshipman, and Captain Fearless is anything but! Battle-weary and violently seasick, the men are soon exasperated that he turns tail at any sign of a Spanish ship.

Mutiny is talked of, and Albert looks set to be the stooge. Can he save himself and the Captain? Will Sally ever be reunited with lost love Roger? And will any of them ever make it back to England alive?