34 days to go. Slough bank manager Jamie's birthday is rocked when he is arrested on suspicion of being an international cyber terrorist. But news of an impending apocalypse throws much more into chaos. 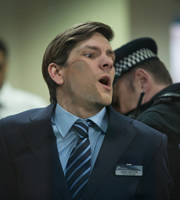 Slough bank manager Jamie's birthday is rocked when he is arrested on suspicion of being an international cyber terrorist.

Interrogated by police, he is confronted by a recent photograph of his wife Layla, who he hasn't seen or heard from since she mysteriously vanished seven years ago.

In New Mexico, librarian Rhonda is thrown behind bars after taking the rap for her teenage son Spike, who hacked into the NSA's computer system. Inside, she unwittingly falls under the wing of sharp-tongued white supremacist Leanne.

Meanwhile, suffocated by life in a convent, Sister Celine heads to the Vatican to interview for the role of research assistant to unconventional Devil's Advocate, Father Jude.

When news comes of the impending apocalypse, chaos breaks out. Rhonda makes her escape, but finds it hard to get away from Leanne. Back in Slough, the announcement prompts Jamie's mum to make a huge admission.