The end of the world is nigh as the adrenaline-fuelled comedy drama reaches a tense conclusion. 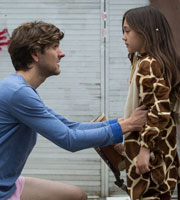 The race is on for Jamie as he struggles to assemble his loved ones, rescue Layla from the clutches of his evil twin and reach the bunker before the approaching comet strikes.

Meanwhile, Celine makes a discovery that makes her want to survive the apocalypse more than ever. But when a building close to her is hit by a meteorite, her hopes of surviving the end of the world dramatically fade.

With the impact imminent, the meteor shower also throws the future of those racing from America to Sutton's bunker into jeopardy, when it causes their plane to come down in a field.