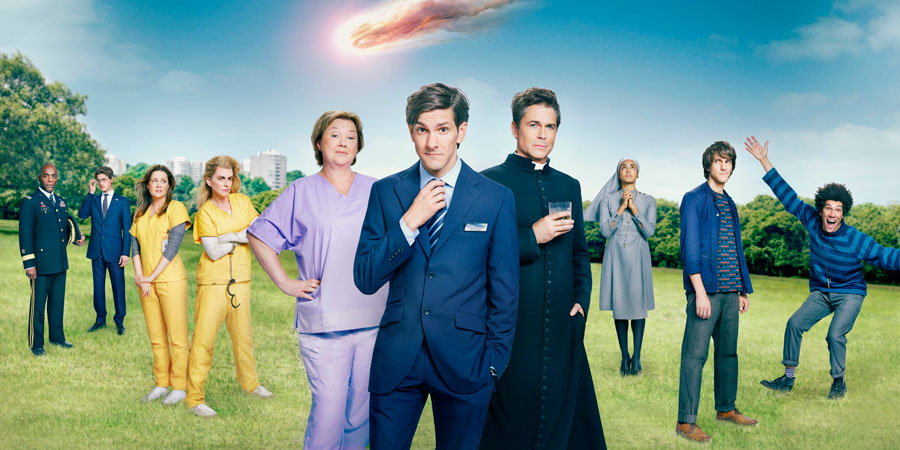 You, Me And The Apocalypse

Comedy thriller depicting the end of the world from the point-of-view of a group of characters from Slough, New Mexico and the Vatican

Comedy drama about the final days of mankind.

Mild-mannered Slough bank manager Jamie is in a rut - albeit a very organised one - consumed by grief for his missing wife. All of that soon changes, however, when he's arrested on suspicion of cyber terrorism and realises that, somehow, he must have an identical twin and that his mum Paula has some serious explaining to do.

Halfway around the world in New Mexico, unassuming librarian Rhonda enters a maximum-security prison for a crime she didn't commit and reluctantly falls under the wing of unhinged white supremacist Leanne.

At the Vatican, meanwhile, foul-mouthed rebel priest Father Jude interviews the beautiful Sister Celine for a role in his office of the Devil's Advocate.

These are just some of the eclectic and seemingly unconnected characters whose lives will start to intersect in the most unexpected ways as news breaks that a comet is on an unavoidable collision course towards earth and will hit in just 34 days.

Some of them are destined to make it to a bunker deep beneath the suburbs of Slough and, as a result, will become the hugely unlikely (and, frankly, somewhat unsuitable) future of mankind.

A guide to the main characters