Sam and Phil's friendship is pushed to the limit as they attempt to escape their pursuers and expose the mass conspiracy they have uncovered.
Preview clips 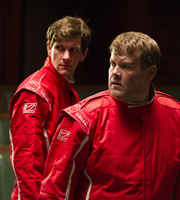 After somehow managing a daring escape from their would-be captors, Sam and Phil are now on the run, on the edge and on each other's nerves.

It's gonna take a huge leap of faith for Sam and Phil to turn back and face the very people that are threatening them, their loved ones and their town. And as friends and family are dragged into this deadly conspiracy, Sam and Phil's friendship is tested to the limit.

They have to expose Reid's evil development plans, save the town, uncover double agents, and rescue their loved ones - all of which means putting themselves right in the line of fire.

Can Sam step up and prove himself to be the man that Lizzie wants him to be? Or will Phil's childish antics finally prove their undoing?

Sam and Phil are on the run, but Smoke and his team are closing in on them.

While Sam and Phil are on the run, Lizzie is in trouble.

Noel is at the launch... but there's still no sign of Sam. He now thinks he's worked out what Sam is up to, but soon gets attacked.

Producer Charlie Leech explains how the helicopter and car stunt was put together.

Director Jim Field Smith explains how they filmed the scene in which the characters of Sam and Phil must jump off a bridge onto a train. This is also a bit of a sketch, as James and Mathew pretend not to realise they'll be jumping.