With a prison escape on the cards, Sam and Phil are still hoping to be back in Bracknell for Christmas.
Preview clips 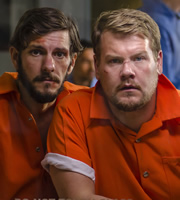 After an explosive escape from a US maximum security prison, Sam and Phil's spirits are momentarily lifted, until another case of mistaken identity finds them risking their lives once again, equipped with a hugely inadequate skill set.

Making new enemies at every turn, and with time until Christmas running out, they still have many roads, railways and runways to navigate before they get anywhere close to Bracknell and a chance of returning to their old lives and loved ones.

The most important members of the team have just arrived.

Hiding in the toilet

Sam and Phil stowaway in the train toilet.

Behind the Scenes: The Heist

Behind the Scenes: Leap of Faith

Mathew Baynton reveals he wasn't keen to do the skydive in the final episode.