It's D-Day for Nicola; whilst she's aboard a train heading to the political wasteland of Bradford he is free to launch an all-out attack on her leadership. She won't go without a fight, but who'll be victorious? 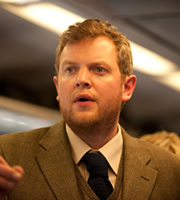 With Nicola Murray safely on a train to attend the party's Here 2 Hear event in far-flung Bradford, Malcolm is free to launch his latest plot against the leader of the opposition.

Olly will find it difficult to help, given that he's in St Thomas' Hospital with a burst appendix, and Ben Swain will want more than a bar of chocolate for playing along with the scheme.

When Nicola finds out what's going on, she has to try to control the situation from a seat in standard class, right under the watchful eye of a 24-hour news channel. Is she sitting on the fast train to Nowheresville, West Yorkshire?