As the key worker housing sell-off continues to unravel, both Government and Opposition are left scrambling for the moral high ground, flinging dirt back down behind them.
Preview clip 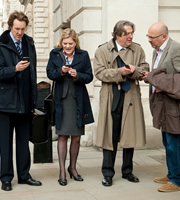 With Nicola Murray and Peter Mannion on the back foot after the unravelling of the key worker housing sell-off policy, both Government and Opposition scramble for the moral high ground.

Several people are even calling for some sort of inquiry. Everyone wants to spin their own version of the story, by fair means or foul. But with more fingers being pointed, the scandal gets even bigger, threatening to implicate everybody.

Meanwhile, in amongst it all, the department is trying to somehow launch the new Carers Pass.

Whilst both the government and opposition scramble for moral high ground, something big is happening. Leak Zero.