Series 3, Episode 3 - The Many Faces Of Sid James

In the 100th year since his birth, this documentary tells the story of the well known face - and trademark yacking laugh - of the Carry On films. 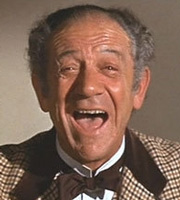 Sid James was a huge star who learned his craft in post-war British films and who played the same 'Jack the Lad' character for twenty years in a string of television sitcom hits.

He was closely involved with the Hancock radio and television series and matured with his audience into the bewildered father figure of the typical seventies family in Bless This House.