Series 3, Episode 4 - The Many Faces Of Michael Crawford

Documentary profiling the life and career of Some Mothers Do 'Ave 'Em and Phantom of the Opera star, Michael Crawford. 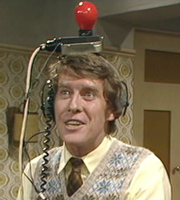 Michael Crawford began his career as a child actor in the 1960s, and his first film, The Knack, was an award-winning cult success that saw him rub shoulders with The Beatles.

In the 1970s he landed his best known part as Frank Spencer in Some Mothers Do 'Ave 'Em. His love of stunts and mastery of Frank's comic mannerisms made him a household name, but he then turned to the stage in what became the biggest musical of all time - The Phantom of the Opera.

In recent years he has stayed on stage, but relentless stunt work and a punishing schedule has taken a toll on his health. Nevertheless, after more than 50 years in the business, he recently returned to musical theatre in The Wizard of Oz - singing and dancing to a new generation.