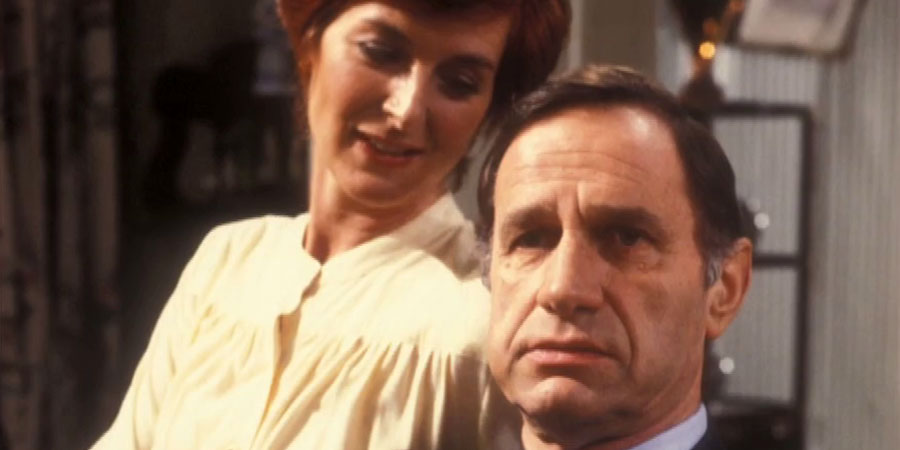 About The Last Song

Carla Lane had already had huge success at the BBC with The Liver Birds and by late 1981 three series of Butterflies had been aired. One of the stars of that sitcom was Geoffrey Palmer, and he plays the lead role in The Last Song too. His character, Leo Bannister, is a 50-year-old who has recently separated from his wife Alice (Caroline Blakiston). He is happily awaiting a divorce settlement and lives with their two daughters Jane (Hetty Baynes) and Alison (Gay Wilde).

The first series ran for six episodes from November to December 1981, airing at 9pm on Tuesdays on BBC2. The second series ran for seven episodes, it returned from February to April 1983 on Fridays at 9pm on BBC2.

The plot of series one sees Leo falling for a twenty-something temptress called Liz (Nina Thomas). Her presence in Leo's life results in wife Alice starting causing difficulties by delaying the divorce proceedings. This first series was very much about Alice playing mind games with Leo, one could say she was punishing him for daring to find someone else so quickly. Leo and Liz's relationship meandered but ultimately lead nowhere. Liz was written out for the second series and so focus moved onto Leo trying to at least get on with his ex. This second series also saw the two daughters' lives and relationships more on show.

The Last Song was never meant to be a 'laugh-out-loud' comedy in the mould of The Liver Birds or later in the eighties Bread. But Carla Lane's pen was always capable or producing wonderful, slow, beautifully observed humour which she returned to again with the likes of Solo and The Mistress.

After The Last Song's second series Carla Lane and Geoffrey Palmer teamed up once more for a fourth and final series of Butterflies.