With Alex in Austria for The Jump, Micky Flanagan joins Adam and Josh to present the first episode in the series, joined by celebrity guest Clare Balding, in front of the live studio audience. 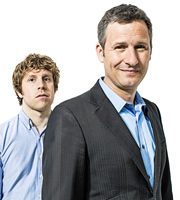 Talking about the new series, Syeda Irtizaali, the Commissioning Editor for Entertainment at Channel 4, says: "We're delighted to welcome back The Last Leg for a triumphant fourth series. There'll be more sideways looks at the week's events but, this time round, we will also be returning to our roots and broadcasting two Sochi Last Leg Specials in March during the Winter Paralympics. Adam, Josh and Alex will once again be offering up their live and unique round up of the games which is, of course, a subject very close to our hearts.

"It also goes without saying that we are, not only, incredibly proud of Adam Hills for winning the 'Best Breakthrough Act' at The British Comedy Awards in December but of all the show's nominations. They are testament to the hard work and relentless energy the boys put into the show."