Adam Hills is joined by Josh Widdicombe and Alex Brooker to provide an intelligent and off-beat commentary on the significant moments of 2012. 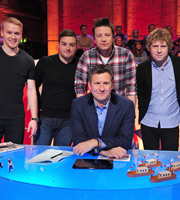 A review of the summer's events that stormed the UK with The Last Leg team - Adam, Alex and Josh - joined by Jamie Oliver to discuss the Jubilee; Nicola Adams and the Olympics: and Jonnie Peacock and the Paralympics.

Jamie Oliver admitted to Adam that he'd loved the Jubilee celebrations: "We loved it. I love any opportunity for the country to come together and have a party... It was like Christmas Day."

He also admitted to being addicted to chilli and had to have some very morning after Adam reminded him of the last time they met - in an interview for Australian TV where Jamie offered to blow chilli up Adam's bottom.

Jamie said: "It's (chilli) got a chemical in it called capsaicin that is the nearest natural form of morphine... it stimulates serotonin and happiness. Instead of knocking back coffee, I have a little nibble on a little bit of chilli and it gets you going."

Regarding the royals, Jamie said: "I do like a bit of royal stuff". On Prince Charles, he said: "He's a great laugh. He's really into his food and farming. For the last 40 years he's been quite pioneering... maybe people around him thought he was a bit of a hippy. Everything he has done has come of age."

He also revealed that 30,000 napkins a month are stolen from his restaurants.

Alex Brooker met up again with London Mayor, Boris Johnson, whom he first quizzed during the opening ceremony of the Paralympics. Boris admitted to Alex that he'd been very worried about the biggest year our city would remember for a long time but particularly about the weather; that 'That Wedgey' was "more painful than you might think" (referring to being caught on the zip wire) and that his haircut wasn't a DIY job.

Nicola Adams told The Last Leg team that the weirdest moment, after winning her gold medal for Boxing, was receiving "ten pounds in the post from an old age pensioner, congratulating her on winning", and that she had donated it to charity when asked what she'd done with it.

T44 100m Paralympics champion, Jonnie Peacock joined Adam, Alex and Josh on the sofa and said he'd not yet received any endorsements yet but that focus would be in the New Year. And that it had been David Beckham who had inspired his 7 year old self, by giving Jonnie one of his training socks.

The Last Leg of the Year was also joined by Rachel, the happiest worker at the Olympics; Josh & Alex pick their favourite moments from the Games; and Alex tries a number of sports at the Paralympics Talent Day.

But it was one tiny question - 'Is it ok?' - that truly captured the athlete's and audience's imagination unlocking some frank debates on whether: Is it ok to crouch down to have your photo taken with Ellie Simmons?; Is it ok to ask how a man with no arms gets out of the pool? And is it ok to punch someone in a wheelchair if they are being a knob? Answers to this and others are all included in The Last Leg of the Year.