The Hunt For Tony Blair

The Comic Strip team return for a special 50s-style 'fugitive' film noir spoof. Prime Minister Tony Blair is wanted for murder and is on the run.
Preview clip 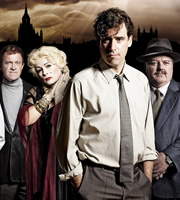 Escaping from Number 10 and leaving behind his adoring wife Cherie, Prime Minister Tony Blair vows to clear his name no matter what the consequences.

But on a foggy London night, Tony has few friends willing to harbour a wanted man. With front pages demanding his capture, Blair has no choice but to go on the run, with Inspector Hutton and his sidekick hot on his trail. The chase unfolds thanks to evidence gleaned from his 'allies' Mandelson and Brown, as well as an unlikely encounter with Margaret Thatcher.

Surely Tony's an innocent man, pursued for a crime he didn't commit?

The Hunt For Tony Blair - Trailer

The trailer for "The Hunt for Tony Blair" a film noir spoof about the former Prime Minister.