It's the Summer Solstice and the girls go to Grace and Hannah's hometown of Lower Sooth to celebrate. 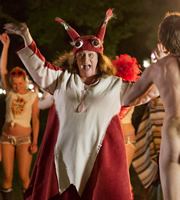 It's the Summer Solstice and the girls go to Grace and Hannah's hometown of Lower Sooth to celebrate. Hannah is disappointed when her mum, Esme is nowhere to be found, Grace is shocked when Gerry turns up despite them casting a spell so that he wouldn't and Jude is looking forward to a bit of excitement in the forest with her first love, Jack.

But these are the least of their concerns when the Witches of Kensington arrive - with Alexa's mother, Karina in tow. This super-coven is set on bringing the Witches of Camden down.

Before the longest night of the year is out, there is a scandalous showdown to survive and some shocking home truths to be shared.