Stella, a witch from Camden, is in deep trouble. Summoning her fellow witches home with a "Switch" text, she's desperate to cast a spell to save her skin. 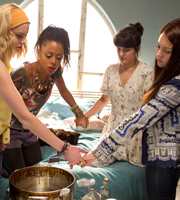 Stella is in deep trouble. Summoning the girls home with a "Switch" text, she's desperate to cast a spell to save her skin.

Hannah flies home from India, Jude abandons customers at work while Grace's romantic encounter is interrupted. With chaos under control and buoyed by initial success, Stella's confident enough to stand up to her boss, Janet. She gets sacked.

The Witches of Camden cast another spell, but rusty after months of being apart, it results in a magical race against time to undo their own mistakes.

When Grace's mum, Gloria, turns up out of the blue Grace is forced to cut the apron strings or be a mummy's girl forever. Meanwhile commitment-phobe Hannah must choose between life on the road or life with her coven.