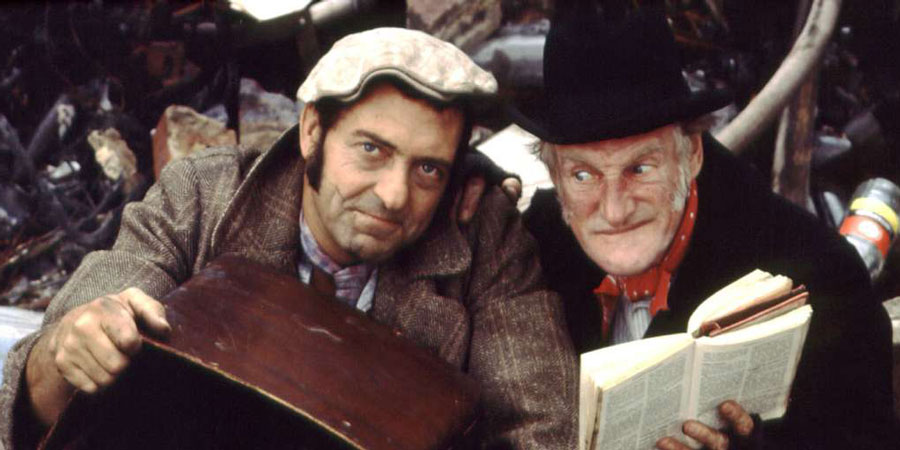 Steptoe And Son is about the love-hate relationship between Albert Steptoe (Wilfrid Brambell) and is son Harold (Harry H Corbett). Together they run a 'rag-and-bone' business, although Harold wishes he could leave.

This programme is a landmark in British sitcom history, as it set the standard against which all sitcoms were judged.

Steptoe And Son was never meant to be a situation comedy. It all started when Tony Hancock dispensed with the services of the top comedy writers in Britain at the time, Ray Galton and Alan Simpson. On leaving Hancock's Half Hour they were invited to script 10 short comedy plays for the BBC. Thus began Comedy Playhouse, which would run from 1961 to 1974 and whose pilots would later spawn series such as Till Death Us Do Part, Meet The Wife, Are You Being Served? and Last Of The Summer Wine. Of Galton & Simpson's 10 originals, it was the fifth, The Offer, broadcast on the 5th of January 1962, about a father-and-son rag-and-bone business, which was deemed most worthy of a series.

Its creation had been hurried and haphazard. Under sudden pressure to produce 10 new scripts in a short space of time, the writers simply decided to start scripting the dialogue for two male characters and worry about the rest later. Soon they became rag-and-bone men, and after a while they realised that one partner was older than the other, so made them father and son. A truly classic television show was thus born. The Offer was a success, and the writers and actors were invited to create a series, which (eventually) they agreed to. Steptoe And Son, as it was now titled, aired in June of 1962 and became an instant success.

It was an absolute landmark, the first 'proper' sitcom in the sense that it featured actors playing actual characters as opposed to comedians playing extensions of themselves. Landmark too, was the exploration of the misery, poverty and hopelessness of working class (even underclass) life on British television. Extraordinary also was the portrayal of a father and son who truly loathed and despised each other. And to find comedy in this situation? Apparently effortless for Galton & Simpson, who blended farce with tragedy, hilarity with cruelty, and created what remains, if not the funniest, certainly the most important situation comedy of all time. Harold's plight was heartbreaking, his desire for love, success, money and dignity constantly thwarted by his controlling, sadistic and manipulative father.

The show ended in 1965, only to return (in colour) for 4 more series from 1970 to 1974, which again featured glorious scripts, and outstanding performances from Harry H Corbett and Wilfred Brambell.

The show never lost its capacity to move and shock audiences as well as make them laugh. This is evident in one of the later episodes, Divided We Stand, in which the farcical and hilarious concept of Harold splitting the house in two (including the TV) is used to explore the extent of Harold's desperation and Albert's cruelty. This episode is justly famous and remains the ultimate highlight in a show packed full of memorable moments.

The series came to a final end in 1974. Having come tantalisingly close to 'escaping' so many times, Harold remained in Oil Drum Lane with his father, the horse Hercules, and a life of wasted opportunity which was at all times thwarted by the twisted old man he lived with. In Steptoe & Son there were no happy endings.

To this day, Steptoe remains a funny, fresh and intensely moving piece of character comedy. The later revelation that Corbett and Brambell actually despised each other in real life as well as on-screen adds yet another depth. Following the old maxim that conflict, hatred and despair reap comic rewards, Steptoe And Son's influence on situation comedy and television generally cannot be overestimated. It is, quite simply, one of the most important television programmes ever produced.

Another article to read about the show:
Steptoe And Son Rides Again (Again)