The El Dude Brothers are bowing out on a high - a strange, complicated and definitely slightly illegal - high.
Preview clips 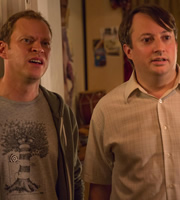 Jeremy is turning 40. And it's hitting him hard. As is the pace of his blossoming romance - three-day drug binges aren't as easy as they were in his 20s. He's taking extreme measures in order to keep up.

Mark is determined to make Jez realise his age. With his job and his love life hanging in the balance, Mark makes an audacious attempt to win the woman of his dreams. Jeremy and Super Hans try to lend a hand, and end up adding to his problems...

Is Mark about to get a corporate battering?

Jeremy is nervous about becoming 40.