AKA: Jez.  Played by: Robert Webb 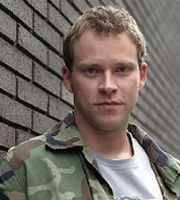 Jeremy is a big kid. A lazy man with big ideas about himself and his future music career. Touchy and self-aggrandising, Jeremy is never far from doing something he will regret. He is clearly the loose cannon of the partnership: a lazy waster with dodgy friends, who dreams of becoming a musician, but can never get his act together, or often even get up in the morning! Although vain, idle and delusional, Jez is basically a nice bloke.

In series three the old love of his life, Big Suze, was back on the scene and so he was desperately trying to get back together with her. The last series saw Jeremy stoop lower than he ever has before - he pleasured a male pop star for some easy money and killed and ate a dog! 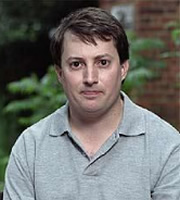 Mark is the sensible one: a professional brogue wearer with a slightly worrying interest in World War Two. He is playing at being very serious and grown up and is a painfully conventional young man with a seething mass of self-loathing, ego and self-consciousness just below the surface. Mark believes nothing is achieved without work, blood, sweat and tears. In fact he masochistically relishes this belief.

In series three Mark finally managed to reach the hallowed ground of 'going out with' the long term object of his affections, Sophie. Before long though he had grown weary of the relationship he had been striving for so long to setup and was therefore looking for a way out. The slight technical hitch at the end of the series was that, instead of dumping Sophie, he 'accidentally' proposing to her instead!

In series four Mark had to face the horror of having to actually go through with the wedding. During the series he spent a horrific weekend with his fiancee's argumentative parents, tried to get his gym instructor sacked and went mad at a business conference! It culminated in Mark having to make the biggest decision of his life whilst hiding upstairs in church: marry Sophie, the woman he didn't love any more, or cancel the wedding and endure all the problems associated with that. 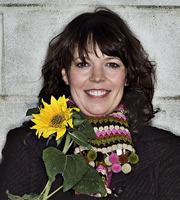 Mark's ray of sunshine, object of desire and friend at work. Sophie is too bright and interesting for her job and most of her colleagues. In Mark she recognises someone who is on her wavelength. Trouble is he's such a bag of neuroses he manages to self-destruct as soon as things start going well.

As the series progress Sophie starts to spread her wings. Before long her latent desire to find something more in life than a job in a loans company and a ready meal with her boyfriend starts to put strain on her and Mark's relationship. Despite their problems when she finds an engagement ring in Mark's draw she instantly accepts his proposal - the only problem is Mark is too embarrassed to tell her that didn't actually want to propose! 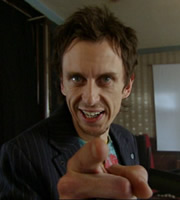 Super Hans is Jeremy's mate and musical collaborator. He's an untrustworthy shyster and fantasist, the kind of guy who makes up his own nickname.

Super Hans is a good-time guy who might just be fun to be in the pub with at closing time, but is never around to pick up the pieces. Jeremy sees Super Hans as someone to look up to. No one else does!

Wherever Super Hans may be drugs can't be far away - the guy probably smokes more crack than the rest of the population put together! After a stint trying to detox, Super Hans was so desperate for drugs that he headed out into the dark to look for some drugs strapped to a frisbee which Jeremy had thrown out. On the way to Mark's wedding, a very hungover Super Hans was sick over the groom's shoes, hat and more! 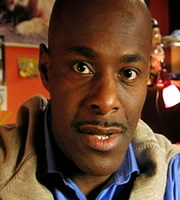 Mark's smooth and cool boss and 'business guru' at JLB Credit. Johnson is a no-bullshit work-monger with a brutal view of the world based on maximising profit and minimising your opponents. Mark looks up to Johnson with a pathetic degree of regard.

At one point Jez managed to convince Johnson that Mark's obsession with working for him was due to a homosexual crush - it caused Johnson to call off a business trip to Cardiff that he had planned to take with Mark. Although now a model of professionalism, Alan was apparently once washed up alcoholic. 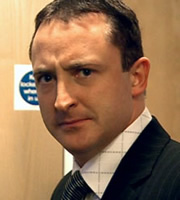 In his bristling normality and easy handling of everyday situations Jeff is the complete opposite of self-conscious, self-defeating Mark. Jeff Heaney is therefore an enemy in Mark's eyes. It's probably a justified hatred as Jeff often bullies Mark.

Jeff works with Mark at JLB Credit which means that Mark must spend a lot of his day in the same room as his most hated foe. For a while Jeff dated Sophie - an act that made Mark hate Jeff even more!

Jeff is basically not a very nice man, he confirms this by revealing his theory that men were put on the earth to just 'kill and knob' apparently. 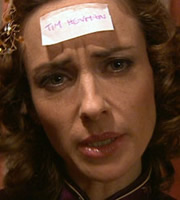 Toni is Mark and Jeremy's next door neighbour. The boys have to endure listening to Toni's bitter remarks about her husband Tony as their marriage falls apart.

Following the break up, Jez spots a potential opportunity to sleep with Toni and proceeds to try everything he can to get his moody but sexually open neighbour into bed.

Toni re-appears in series two to announce that she and Tony are getting re-married. A party is organised to celebrate. It isn't long before Toni and Tony fall out again though, at which point Toni pressured Jeremy into sleeping with her... which was just after he had got married to Nancy! 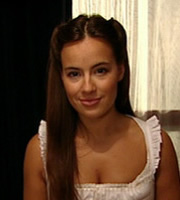 Big Suze apparently lived with Jeremy in a shared flat for a year or two before the start of Peep Show. But while for him it was a halcyon time of love and laughter she barely remembers it in between all her other relationships and interests. Suze is incredibly posh and a little selfish. She would like to be more bohemian than she actually is.

When Big Suze re-enters Jeremy's life for a short while he becomes infatuated with her. It's not hard to see why, there's a couple of reasons why she got that nickname! 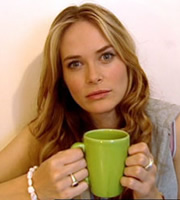 Nancy is a flirty, bohemian Californian blessed with very good looks. Jez fell in love with her as soon as he set eyes on her at a new-age dance class. They soon got married - but only so she could obtain a visa to stay in England.

Although the brief period they were were together was the 'happiest administrative procedure' of Jeremy's life (he got some great sex out of it) she is now his 'ex visa wife' (although technically they would appear to still be married).

Nancy is a somewhat confused Christian. Although she may be a little naive she is always sweet and well meaning.