The comedy format Werewolf: Live is being developed for TV.

The live panel game show, which was first performed in front of an audience in 2017, is hosted by comedian Jon Gracey. The show is partially based on the card game Werewolf, which is described as "a party game for devious people"; it turns the game it into a raucous comedy format.

It's now attracted the attention of production company Avalon, who have signed a development deal with the team behind the live show, with the aim of pitching it to broadcasters. Avalon's other current TV comedy formats include Taskmaster and Al Murray's Great British Pub Quiz.

The game takes place in a village under attack from werewolves. Most players are villagers, whose aim is to uncover the wolves, who are trying to masquerade as villagers. The werewolves are in cahoots and must subtly work together to influence the group into accidentally accusing innocent villagers of being werewolves, thus killing them. The comedy derives from the debate about who should be killed, with comedians hurling abuse, insults and accusations at each other.

Host and co-creator Jon Gracey, who acts as the moderator of the game, says: "It's been thrilling seeing comedians get their teeth into the game and really engage with the serious business of throwing each other under the bus and desperately protesting their innocence. It's especially fun when the audience know that a werewolf is lying but are powerless to stop them from winning the group over - which we think will translate well into an onscreen dynamic."

The Werewolf: Live TV project is currently in the development stage, and further details will be released if it gets the greenlight to record a pilot episode. Jason Dawson, who also produces The Russell Howard Hour, is overseeing the process.

The live show originally invited members of the audience on to stage to play the game, but has now evolved to being played by comedian guests each time. Talking to British Comedy Guide, co-creator and live producer Vivienne Egan says: "It was a fun and unusual experience to have audience players, but we did our first Charity Spectacular show with an all-comedian lineup, and it was so riotous and chaotic that we knew we were onto something really special."

Following a successful run last year, the show is now back at the Edinburgh Festival from today, playing daily at Underbelly at 9:05pm (Info & Tickets) and for a one-off Charity Spectacular at Udderbelly on August 15 at 11.30pm (Tickets). 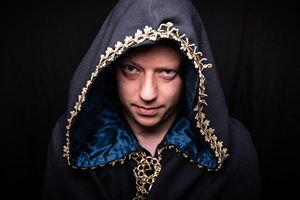