The winners of the BAFTA TV Awards have been revealed.

Below are the comedy award winners, and their fellow nominees, plus videos.

Nominees: The Big Narstie Show, The Last Leg, Would I Lie To You?

Nominees: Ant & Dec (for Saturday Night Takeaway), David Mitchell (for Would I Lie To You?), Rachel Parris (for The Mash Report)

Jessica Hynes (for There She Goes)

Nominees: Daisy May Cooper (for This Country), Julia Davis (for Sally4Ever), Lesley Manville (for Mum)

Steve Pemberton (for Inside No. 9)

A full list of winners is available at bafta.org

The ceremony was hosted by Graham Norton. Here is his opening monologue:

Notably, This Country star Daisy May Cooper wore a bin bag dress to the ceremony: 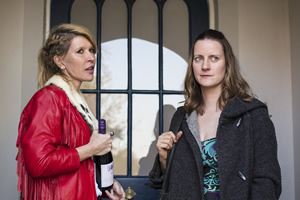