Conversations From A Long Marriage, which is already a popular Radio 4 show, focuses on a couple who have been married for over 40 years. Children of the Sixties, they're still free spirits, drawn together by their passion for music - and each other.

A one-off episode starring the duo was broadcast on Radio 4 on New Year's Day, picking up positive press reviews and listener feedback. The network has now recorded another episode for this Christmas, with a four-part series to follow in 2019.

British Comedy Guide can reveal the comedy may also now become a TV sitcom, with a BBC pilot in the planning stages.

Conversations From A Long Marriage is written by Jan Etherington, who has been married to Gavin Petrie for over 30 years. Together they have created hit sitcoms including Second Thoughts, Faith In The Future and Next Of Kin.

Talking to British Comedy Guide about the genesis of her latest show, Etherington explained: "I wrote it for Joanna Lumley because she epitomises that ageless style and curiosity for living in the moment. Roger Allam is absolutely wonderful, one of the gods of radio and it was just magical to see them together, they are so in tune and they genuinely like each other."

Etherington, who also teaches sitcom writing, says she was motivated to create the comedy as she was "tired of my generation being portrayed as golfing caravanners with no reference to how they were in their youth".

In an article for The Express published earlier this year, she expanded on her reasoning: "All my comedy writing life, I've aimed to create characters, stories and narrative that I could identify with - but as I get older, I am appalled at how my generation are portrayed - on screen and on air.

"The 'pensioners behaving badly' and/or stupidly; the 'let's laugh at the oldies' reality shows and the unforgiveable crassness of prime time comedies, which portrays anyone over 60 as bickering, clueless - often spiteful - fools, whose only purpose seems to be to misunderstand the obvious, or snap bitchy one-liners at each other. I was tired of the stereotypical 'babyboomer' portrayals, of those who have 'become old', none of which reflected the 'still the same inside' attitude of me - and my friends. They are like no-one I know - or want to know."

The Radio 4 Christmas special was recorded last week and is set to be broadcast on the station on Christmas Eve at 11:30am. The subsequent four-part series is set to be written, recorded and broadcast next year.

Etherington says: "Radio is a wonderful medium for writers, in that everything depends on the words. You can't get laughs by dropping trousers or falling off the back of the sofa, so, for me, Radio 4 is the ultimate place for a writer and it's an honour to be commissioned by Radio 4, for a comedy series."

BBC Studios has commissioned the TV pilot, for which a script has now been written.

Speaking to BCG, Etherington said that the creation of BBC Studios means the corporation's radio and television production teams are liaising with each other again in an attempt to develop formats.

"When Second Thoughts (pictured) was a huge hit on radio, back in 1989, we obviously offered it to BBC TV, and it got turned down - along with lots of other radio comedies: After Henry, Whose Line Is It Anyway?, etc... Greg Dyke, who was then head of LWT, bumped into us at a press launch (we were both journalists) and said 'I've heard Second Thoughts on Radio 4, send me the tapes.' LWT bought it, where it ran for 5 series, 49 episodes and averaged around 10 million viewers. Now they're liaising between radio and TV at the BBC all the time. Better late than never!"

It may be a while before the pilot is filmed however, as a gap will have to be found in the busy schedules of the two stars.

Roger Allam, who will soon be seen in new comedy film Ilkley and has a number of other projects in development, is committed to playing DI Fred Thursday in ITV detective series Endeavour.

Meanwhile Joanna Lumley, who can currently be seen on ITV presenting Joanna Lumley's Silk Road Adventure, is preparing to undertake her first tour. Titled It's All About Me, it runs from early October and tickets are available now

Jan Etherington will be presenting her next comedy writing course in Halesworth in Suffolk on the weekend of the 6th and 7th October. Further details can be found at www.comedycourse.biz

Further details about the Radio 4 episodes of Conversations From A Long Marriage, and the TV version, are expected to be revealed in due course. 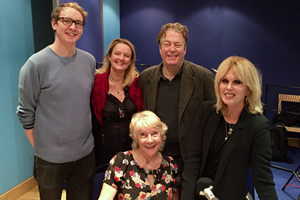 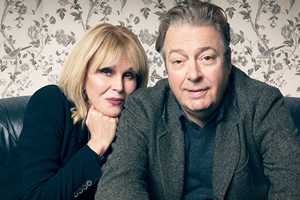