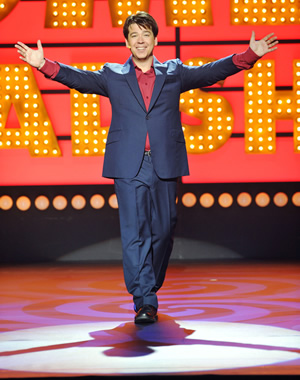 Michael McIntyre is being lined-up to host a new TV comedy entertainment format.

The currently un-titled series, if commissioned, will see the comedy star delivering his trademark stand-up alongside segments featuring celebrity guests, games involving members of the public and pre-filmed inserts.

Few other details are known about the format, which is in an early stage of development. Two run-throughs are planned to take place at RADA Studios in London on Monday 1st July and Monday 15th July.

An application form for free tickets is now available, with the booking company expecting high demand and warning fans that they are unlikely to be able to issue tickets to everyone who applies.

The speculation is that McIntyre's new show is for the BBC, who are still seeking out successful family-friendly Saturday night entertainment formats following flops such as Don't Scare The Hare and Richard Hammond's Secret Service. The BBC's last comedy-variety format was Lee Mack's All Star Cast, which featured a mix of stand-up, sketches, celebrities and involvement of members of the public.

McIntyre, who reportedly made £21 million with his last arena tour, started to make his assent to superstardom after appearing on The Royal Variety Performance in 2006. In 2009 he was given his own television show, Michael McIntyre's Comedy Roadshow (pictured). The stand-up format ran for two series and a Christmas special, with ratings regularly rising above 4 million viewers.

The new format is likely to be produced by Open Mike Productions, the company behing formats including Michael McIntyre's Comedy Roadshow and Live At The Apollo, and the production arm of McIntyre's agent, Off The Kerb.

On Sunday the comedian appeared in a charity tennis match at Wimbledon alongside other celebrities including Jonathan Ross and Jimmy Carr, plus professional player Andy Murray.