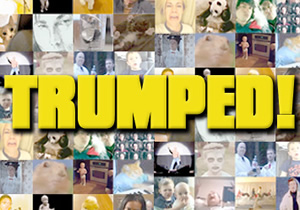 BBC One is working on a new comedy panel show format called Trumped!.

The format sees three comedians battle to 'trump' each other by finding the funniest videos. The guests must try and outdo their opponents in a range of different categories.

A run-through of the show will be recorded at the Tabard Theatre in London on the afternoon of Wednesday 6th February 2013. Free tickets have been released for the show, and fans can apply via our free tickets page

No details have yet been released on who will host Trumped!, or who the guests will be.

Avalon described the availability of tickets as "a unique opportunity to see an exciting show in the early stages of development."

Comedy shows based around funny clips are currently undergoing a resurgence due to their incredibly low production costs. Earlier this week BBC One piloted Harry & Paul's Magnificent Sporting Moments, a show that saw Harry Enfield and Paul Whitehouse star in sports-themed sketches to link together YouTube clips.

The channel is also currently airing Animal Antics on Saturday evenings, a family-friendly clip show hosted by Tim Brooke-Taylor. Viewers are being asked to send in their own funny videos of their pets, suggesting a second series is likely.

Meanwhile, Channel 4 is about to begin airing Paddy's TV Guide, a comedy clip show series fronted by Paddy McGuiness; and Comedy Central has commissioned 13 episodes of Seann Walsh World, in which comedian Seann Walsh will 'mix stand-up and video to illustrate his thoughts'.

Trumped! is currently in the early stages of development and may or may not be commissioned as a TV series.