When Maddy discovers her mum has a boyfriend, her attempts to talk her out of the relationship lead to wedding plans and Maddy in a big pink fluffy dress. Ted finds a novel way of outwitting a bully, and Katy misplaces a car.
Preview clip 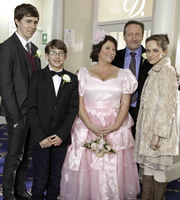 Some time has passed since the last visit to the chaotic and colourful Riley household. Baby Rosie is now two and about to begin playgroup, and the teen triumvirate of Katy, Danny and Ted are embarking on their own new relationships.

Refusing to be fazed by the increasingly complicated brood of her children and step-children, their step-siblings and half-siblings, Maddy is still trying to be all things to all people. Now she finds herself coping with a work-at-home husband, the chaos caused by both of their exes and neighbours at war (with each other).

In this episode Maddy rises to the challenge of meeting a new boyfriend - her mother's! Her attempts to talk her mother out of the relationship lead to wedding plans and Maddy in a big pink fluffy dress. Meanwhile, Ted finds a novel way of outwitting a bully, and Katy misplaces a car.

Maddy and Jim discuss how they might move on with their lives after the other one is gone and there's some wedding news too.