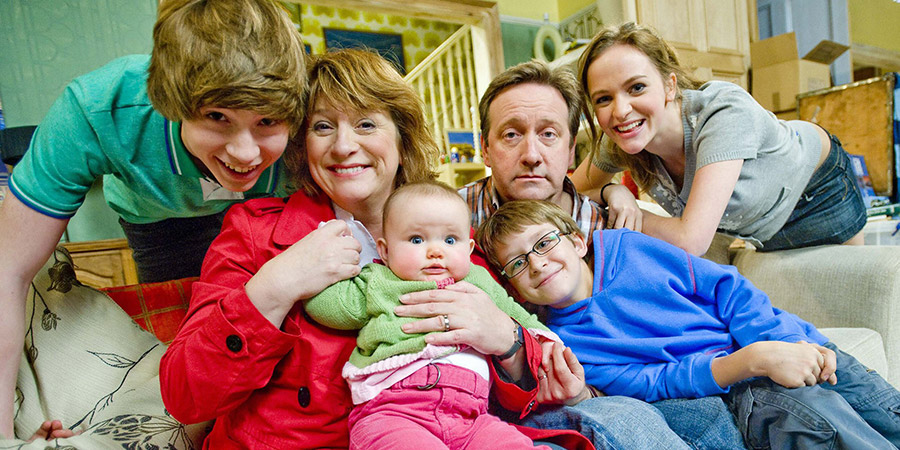 Life Of Riley centres around second time newly-weds Maddy and Jim, and the joining of their two families into a new dysfunctional whole...

The ever-optimistic Maddy suddenly finds herself at the head of a modern-day extended family made up of a complication of children, stepchildren, step siblings and half siblings - with a few ex-partners and in-laws thrown in. Maddy discovers that parenting has never been so complicated and she is outwitted at every turn by people a quarter of her age.

The Weaver family next door are unfortunate enough to cross paths with the Riley family fairly frequently.

Series 2 sees Maddy still trying to be all things to all people within her complicated, extended family circle of children, step-children, step-siblings and half-siblings - with a few ex-partners and in-laws thrown in for good measure.

Struggling to be a nurturing mother, caring wife and competent human being, she throws herself with gusto into the daily maelstrom that is modern-day family life, finding that parenting has never been more difficult or complicated - and that she's as valiantly ill-equipped as ever to deal with it.

For Series 3, some time has passed since we last visited the chaotic and colourful Riley household. Baby Rosie is now two and about to begin playgroup, and the teen triumvirate of Katy, Danny and Ted are embarking on their own new relationships.

Refusing to be fazed by her increasingly complicated brood of children, step-children, step-siblings and half-siblings, Maddy now finds herself coping with a work-at-home husband, the re-emergence of both their exes, neighbours at war (with each other)... and the challenge of meeting a new boyfriend - her mother's new boyfriend to be precise!