Series 2, Episode 4 - Is She Really Going Out With Him? 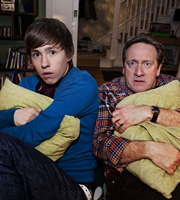 Maddy isn't bothered that her ex-husband, Robbie, has a new trendy young girlfriend. That is, until she discovers that her son, Ted, thinks she's the greatest thing on two legs...