Krod and the gang go on a mission to rescue the leader of the resistance against the evil Meconian Empire.
Preview clip 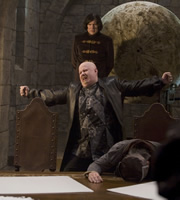 Krod and the gang go on a mission to rescue General Arcadius, Krod's mentor and the leader of the resistance against the evil Meconian Empire. Dongalor reveals that he is in possession of the ultimate weapon of mass destruction, the Eye of Gulga Grymna.

Krod learns that he is "The Golden One", the central figure in a prophecy that foretells the destruction of the Empire. Meanwhile Dongalor is smitten with a peasant girl and discovers he needs to add a significant piece to the Eye before it can become fully operational.

Krod and his friends give his mentor a final send-off.