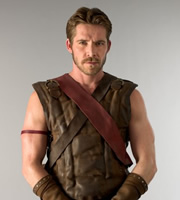 Krod Mandoon is the reluctant leader of a rag tag band of inept freedom fighters toiling away in obscurity.

Krod is in his thirties and ruggedly handsome, but in all other respects he is the unlikeliest of heroes, a self-proclaimed idiot for whom glory waits. Bound by common cause, are he and his comrades really the answer to his oppressed people's prayers? 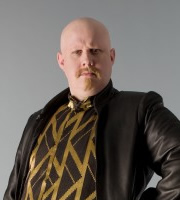 Dongalor is the lovably sociopathic Chancellor of a lowly province. He was at the military academy with Krod and now lives in a large castle in the backwater of Hessemeel. But he is determined that all that is about to change thanks to his discovery of the Eye of Gulga Grymna, the deadliest weapon of the ancient world.

The Eye of Gulga Grymna is a seven tonne granite ball marked with ancient runes, crisscrossed with sluices. It was buried with good reason; it nearly destroyed the world. Its deadly beam turned fertile valleys into barren wastelands, bustling cities into rubble. Even Atlantis vanished under the Eye's lethal gaze. The challenge for Dongalor and his men is to unlock the secret of its operation by decoding the ancient hieroglyphs.

Dongalor is pretty ruthless - he will happily have people killed for just sneezing. However, he often reveals himself to be a complete coward hiding soft tendancies. 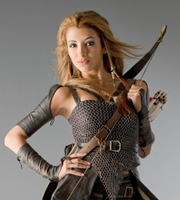 Aneka is a fierce warrioress skilled with many weapons but none more so than her unbridled Pagan sexuality.

Aneka is in her twenties, a beautiful, libidinous, lithe pagan warrioress, oozing sexuality. Sex is just another weapon in her arsenal. But there is an elephant in the room - her wardrobe. She needs more of it, starting with underpants! 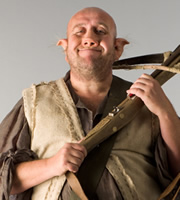 Loquasto is the oafish servant with a bad aim. He is Krod's lovable, low born companion, who belongs to a race of pig-like creatures known as Grobbles.

Loquasto insists on calling Krod 'Master' and is ever faithful to him. Krod's father won Loquasto casting lots in a frontier brothel and gave him to his son on his 13th birthday, when Krod also freed him - and has done so many times since. 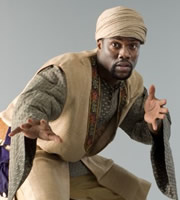 Krod took him on because he said he could summon storm clouds and assume the form of animals. But his magical powers are somewhat dubious and he's not sure how much longer he's going to get away with the deception. 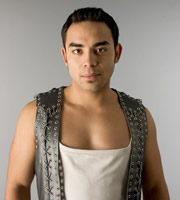 Gay Bruce is the jailhouse lover of Krod's late mentor, General Arcadius, and the newest, most fabulous, member of the team.

Unbeknown to Krod, his mentor was a deeply suppressed homosexual who did not discover his sexual orientation until he was locked away in a dank and fetid dungeon with dark-eyed Latino smooth boy Bruce. When Arcadius dies in Krod's arms, Bruce is a broken-hearted witness to Dongalor's fatal shot. Thereafter Bruce becomes Krod's spiritual connection to his late mentor. He tries to guide Krod and keep the General's spirit alive, all with his irrepressible and anachronistic gay pride on full display. 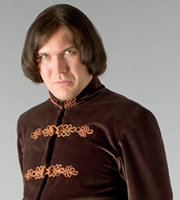 Barnabus is the right hand man to Dongalor. He is very good at grovelling and toadying. Barnabus is part administrative assistant, part advisor, and one hundred percent loyal to Dongalor.

Barnabus has been Dongalor's aide since he was his footman back in his academy days. The others around the palace see him as reasonably junior. However, the fact that he has Dongalor's ear, means that he can get away with a huge amount and can wield power within the palace.