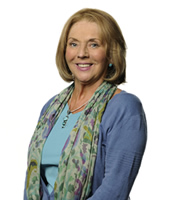 Sal is feisty and determined and loves being the centre of the busy town community. She is used to not having a minute to herself and is happy to help in anyone's hour of need, whether it is dishing out prescriptions or straightforward common sense.

She usually knows what people really need, whether they want to hear it or not. Sal is often exasperated by her daughter but loves her family dearly and when her husband, Mike, dies she finds it is other people who don't know how to deal with the grief, although she is coping fine - after all, Mike was thinking of retiring anyway! 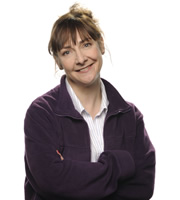 Tip is Sal's best friend, her partner in crime and, as the surgery's bossy receptionist with a unique filing system, she knows everyone's ailments and intimate details.

Tip is always up for a laugh and ever ready to nip down the pub for some alcoholic relief from the day's work/gossip. Flirty and fun, Tip is a good person to invite to a party. 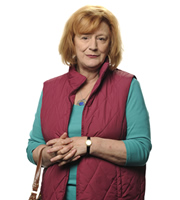 Eileen is the leader of the Women's Guild and proud to wear her chains of office at every meeting. She likes to keep things very constitutional but she is adamant it's not all 'jam and Jerusalem' at the Guild.

The ever flustered Eileen is always trying to recruit new members - well, when she's not organising craft mornings or new and interesting Guild outings. She takes her role very seriously indeed. 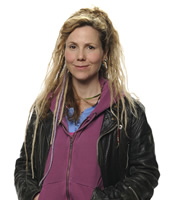 Tash is Sal's hippy daughter. She is concerned with things like the lack of recycling in the town.

Tash is never able to hold a job down. With her young son Raph in tow, Tash is always trying out some new way to save the planet, or trying to get on a course to study circus skills - anything not to join the rat race!

In the latest series, Tash tells her mother that she and Spike will live off the land as 'urban foragers', by finding free food - but they have the problem that it's now spring and therefore nothing is growing yet. So she is stealing food and eating from supermarket bins. 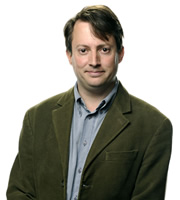 James is the exact opposite of his sister - he is hard working and the sensible one of the family. He finds his sister irritating and childish.

When his dad dies, James becomes the new GP in Clatterford. 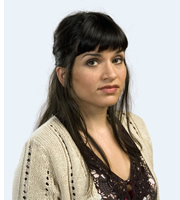 Yasmeen is James' equally sensible wife, but taking on the role of practice nurse isn't really Yasmeen's cup of tea - being quite sensitive to bodily functions, she isn't really the right person for the job. 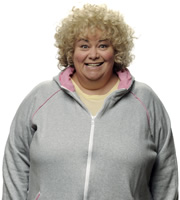 Rosie is someone that everyone in the Guild looks out for. She is sweet and well-meaning and works in the local cheese factory.

She suffers from a mental health disorder which sometimes results in her alter ego Margaret coming to the forefront - and Margaret is quite an unwelcome force to be reckoned with! 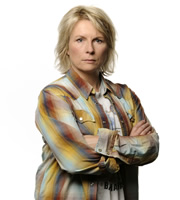 Caroline is a very busy lady of the country. When she's not horse riding or going to Madonna's for the evening, Caroline is on the lookout for someone to do the school run. She sometimes brings her children to Guild meetings because, quite frankly, she "can't do everything". 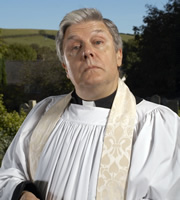 Hillary is a grumpy and very traditional man of the church who is always at his wits' end with his parishioners.

The vicar detests the fact that his church has been upholstered by the Guild and their 'craft', from hymn book covers to wall hangings, and often needs reminding what 'community spirit' is all about. 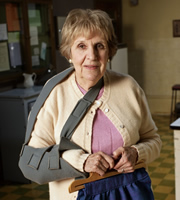 Queenie is the local and quite ineffective lollipop lady, but is always on hand to help out the Guild and offer a kind word. 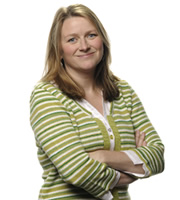 Kate is the local Grievance Group visitor and, although very chirpy and well-meaning, in the early series she is still wallowing in widowhood herself - after all, it has only been five years.

Kate joins the Guild to find some company and soon makes many new friends. 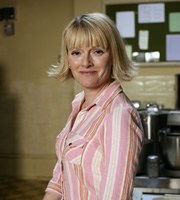 Susie is one of the members of the guild. She is very friendly and helpful, but as a result is often taken advantage of. Caroline bosses her about the most. 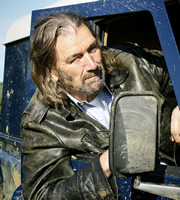 Jock, a builder by trade, is planning on developing a barn in Sal's back garden, much to Sal's dismay.

However, as she starts spending more time with Jock, Sal begins to see another side to the gruff man. 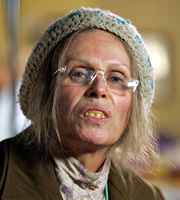 Delilah is an outspoken and slightly eccentric old lady. When not off to town to buy a tomato (just one), Delilah could be found playing the organ in the church (very badly indeed) or getting into a pickle with the local fire brigade.