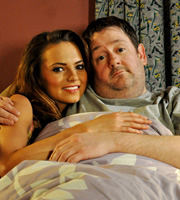 Moz plots to win back the heart of his true love, Jenny. However, when he discovers she has joined the police force, his plans are thrown into disarray.
Preview clips

A heartbroken Moz is trying to win back the love of his life Jenny. So he is more than a little surprised when she arrives with PC as a Community Support Officer!

An out of breath Tanya is greeted at the door by Colin and Moz. She has been pilfering at a new shop called 'Bag Lady'. It's only when Psycho Paul arrives with Cartoon Head that things take a turn for the worse.