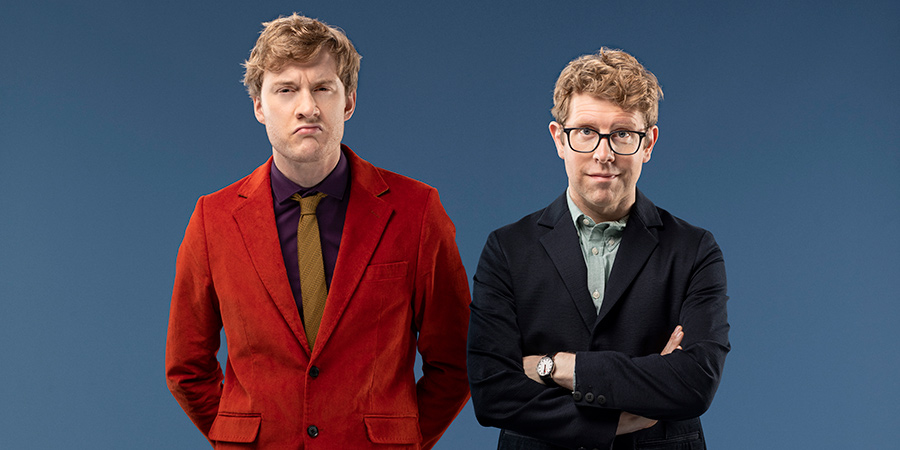 Ahead of Series 3 of Hypothetical arriving on Dave, Josh Widdicombe and James Acaster discuss how staying two metres apart has helped them create their best series yet.

How do you feel about getting a third series of Hypothetical?

Josh: Very excited. It was commissioned to be filmed March or April last year so I seem to remember thinking we're going to be ok because we'll do a three-week lockdown and then film straight after that... and then it was six months later! So it was really nice to be back in a TV studio because it was one of the first things a lot of people had done. It felt like a weird window into normality between the lockdowns.

What can we expect? Are there any new themes?

James: 'No touching' is what you can expect! If you're tuning in for people touching each other forget it, it's not the show for you. You can expect a longer desk. Josh and I have a big long desk that we're sitting at very far away from each other, which I think actually suits the tone of the show even more than the last one. It looks comical and whacky so it weirdly works.

Josh: If we got another series I think that would stay. The long desk was actually one of the few bright spots to come out of a terrible year.

James: There's also a lot more teamwork in this series from all the guests. No one's ever left on their own to just figure out a hypothetical by themselves, which was really fun to see and to have that mixture of ideas and personalities flying around.

What is it about the show that makes it so successful?

Josh: I think people enjoy the freedom of it. I think a lot of the best TV shows are the ones where the guests are having fun and lost in it, rather than shows where people have all come with their jokes that they want to say. That is really fun and when it flies people lose themselves in it. There's also that element of it can all go wrong, which I think gives it a tension and excitement.

James: Also, because so much of it is improvised and improvisation is so much based on saying yes to things, it means you end up having an inherently positive show because everyone is having to back each other up and agree with one another and work as a team. Definitely, back in the day, panel shows were very combative and this is the opposite of that; it's a show about teamwork.

Do people get more nervous because it's an improvised show?

Josh: I don't think so because the people who agree to come on it know what they're letting themselves in for, particularly now. From a personal point of view I much more enjoy going on a show where I don't know what I'm going to say or what's going to come up so I can roll with the punches. I feel a lot more relaxed in that situation.

James: I think, with most comedians, their laziness will trump anything! So the fact they don't have to do any work for it, they'll happily go out there and be happy on the spot. "No prep? Right, I'm there!"

Josh: If the first time you have to think about it is when you're getting out of the car (at the studio), that's the ideal job for a comic. 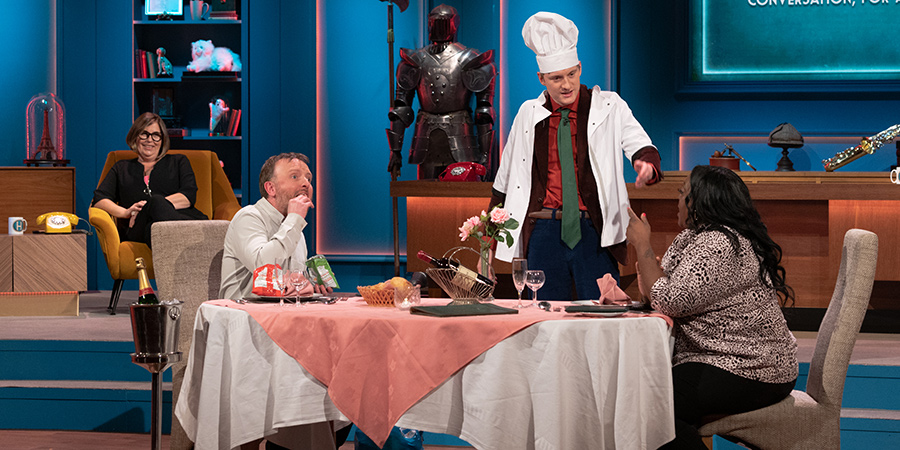 Was everyone very excitable getting back to filming after a while away?

Josh: It was really nice to see everyone. There was a weird thing after the show where we'd all gather on the landing of Pinewood Studios and have our one beer, which I'm not even sure if we were allowed, and then we'd try and string that out because it was some kind of human contact.

James: We often record two episodes back to back and normally you'll go to the green room and have some beers with the team and guests and unwind a bit. But with this series it was, 'Get off the landing and in to your cars! Go home!'

Who were you most excited about seeing? You have a lot of your mates on...

Josh: Yeah it's always a pleasure to see your friends. There are people like Tom Allen or Sara Pascoe and those who have been on every series - they're partly on every series because they're brilliant funny but also because they're just fun positive people to be around. It also feels more electric when people haven't been on it before, like Judi Love. She's a really good comic so I was really excited to see what she did. So it works in both senses.

James: One of the things about doing a show like this is putting people on who haven't done much TV - people like Joe Sutherland, Evelyn Mok or Sophie Duker - so you can show people how brilliant they are. You feel like when you're introducing a friend to a film you really like and you're excited to see how much they like it.

It was Jo Brand's first time on the show... 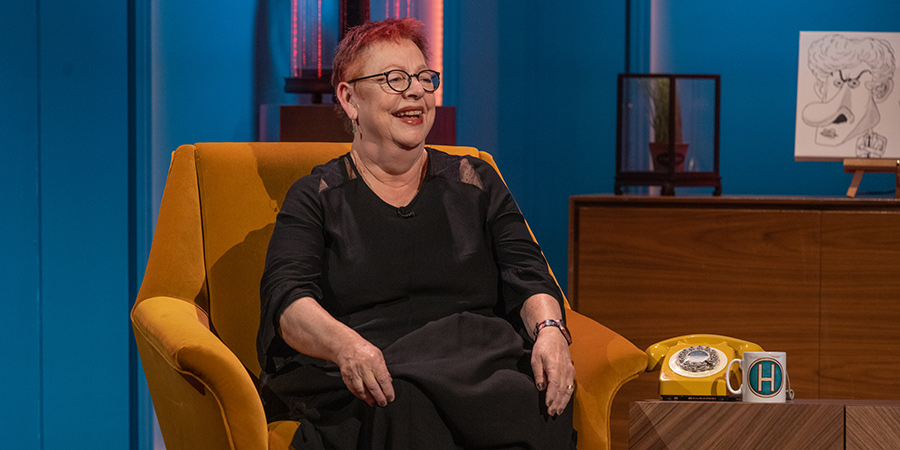 James: That was her first time and she's unflappable isn't she? You throw anything at her and she goes 'yeah'.

Josh: Right at the start she told an anecdote that ended with someone dying with that kind of laid back confidence of someone thinking "I'll just tell that anecdote two minutes in to the show"! That's someone who has been on everything for 25 years and doesn't give a fuck in a really good way! You get to know someone through doing the show in a way that's not intended.

James: You get them on a level playing field. Like you get Jo on a team with Jess Fostekew who hasn't done much TV, and in Series 2 when we had Jonathan Ross with Maisie Adam. You have these people who are national treasures next to people who are new faces working as a team and very much accepting each other's ideas. There's no hierarchy there because they're both having to think on their feet together.

Who has shocked you the most with how random their brains are?

James: I have been a fan of Sally Phillips for a long time but I wasn't aware of just how many ideas she can fire out at once! We asked her one question - "who's your wrestling persona going to be" and she suddenly built an entire universe within seconds. The amount of detail she could come up with on the spot was amazing.

Josh: Sara Pascoe drew a moustache on quite early doors with a permanent marker, which I've not seen her do on a show before and I'm not sure she will again!

What makes a dream guest?

Josh: Someone who's willing to cooperate, laugh and answer the question properly. By actually thinking what they would do and it's not going for the laughs so much, it's answering the question and being confident the laughs will come from you actually trying to solve the question.

James: Ultimately it's hard to think about an individual perfect guest because the nature of the show is more about the perfect panel, where you want everyone supporting each other. Sometimes you get those line-ups where they all have each other's backs. I saw someone talk about improv in the States and they said that before a troupe goes on stage they all go around saying 'I've got your back'. It's so corny but you kind of need it I think.

Josh: I used to do that with you on Mock The Week didn't I James!

There's an episode on this series with Tom Allen, Suzi Ruffell, Sophie Duker and Desiree Burch and it really felt like those four people should be together in a room having that laugh. It felt like one long dialogue between all six people rather than individual guests.

James: There's a punchline about an elephant that I did not see coming at all. 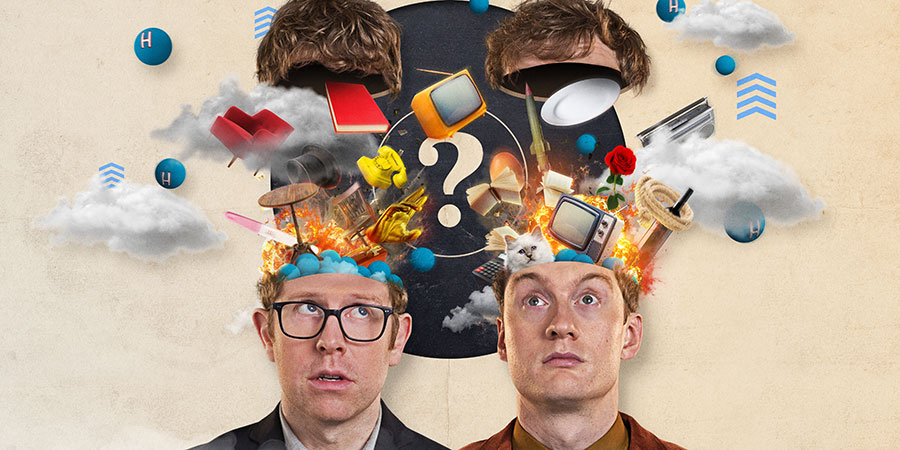 Have you ever done a hypothetical question about a pandemic?

Josh: No but we were going to do how much not to touch anyone for a year. And then we were like 'well it's not the big problem but it has ruined that question for us!' I could probably put a figure on it now having done it, but it's been a weird year.

James: Or how much money to occasionally agree with Tories for a year?

Are you hoping for a series four and do you have enough hypotheticals if so?

Josh: There are always hypotheticals, it's infinite. Well actually come back to me in 20 years! I think series three is our best series in that we've tightened things up, and it takes a while for things to find what they are. We've also realised that we're better when we're two metres apart! It's when we're funniest. Or down Zoom, it's probably easier.

James: Yeah we're actually in the same house now; we just don't want to be near each other!