Peter and Judith have got mixed up in the dark arts of voodoo on their latest disastrous package holiday.
Preview clips 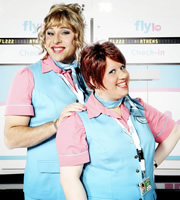 Peter and Judith have got mixed up in the dark arts of voodoo on their latest disastrous package holiday; Tommy finally gets his interview to be a pilot; Fearghal has his fingers crossed for a Golden Trolley at the Steward Of The Year Awards; and Penny Carter is actually having to do some work for a change.

The whole of FlyLo's ground crew is out on strike. How will airline owner Omar Baba deal with this latest staff mutiny? Just another hectic day in the life of an airport terminal. Also including special guest Dale Winton.

Taaj deals with unhappy customers when flights are cancelled due to FlyLo strike action.

Moses Beacon is raising money for his charity Wishwings, which helps ill children go on a flight. His latest fundraising idea is to record a charity single.