Series 1 - Come Fly On The Wall

Documentary going behind the scenes as Lucas and Walliams create and develop Come Fly With Me, following the trials and tribulations as they bring to life a host of new characters.
Preview clips 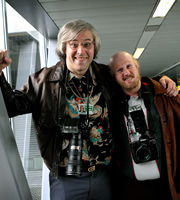 Come Fly On The Wall takes a look at the making of Come Fly With Me, Matt Lucas and David Walliams's follow-up series to the award-winning Little Britain.

This one-off special goes behind the scenes of the new airport-based mockumentary and talks directly to its creators as they develop the series from pre-production discussions and rehearsals to filming at some of the UK's busiest airports.

Viewers see Matt and David transforming into their new characters in the make-up chair, and bringing them to life in front of the camera. They also chat with interviewer Mark Lawson about the new series and give an insight into their working relationship and how it has developed over the years.

Behind the Scenes: Being Precious

Matt Lucas and David Walliams discuss the lengthy time spent in the make-up chair to achieve the look of Precious, from Come Fly With Me.

Behind The Scenes: Matt and David play kiss chase

Matt Lucas and David Walliams show their affection for the crew of Come Fly With Me by kissing them.