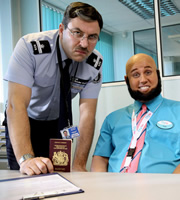 Immigration officer Ian Foot pulls in Taaj for questioning as part of a random security check, and viewers discover how far Fearghal is prepared to go to get nominated for Steward of the Year.

Tommy Reid finally gets his chance to apply for pilot training, and the important work of dog-handler Steve Downes and his canine partner Bobo is followed as they patrol the baggage halls in Arrivals.

Over on the FlyLo desks, it's Helen's last day and Melody and Keeley are about to find out which of them is going to get promotion.

Police dog handler Steve Downes explains how he trains up his sniffer dog to detect drugs within the airport.

Chief Immigration Officer Ian pulls in Taaj for questioning as part of a 'random' security check. However, after the interview Taaj is less than impressed and accuses Ian of having a racist agenda.