When Alia fails her exams, Mr Khan endeavours to get her into a good school, one way or another.
Preview clips 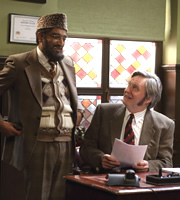 Mrs Khan tells Mr Khan to sign Alia up at the Muslim Academy, but when he finds out how much it costs, Khan decides there's a better option...

Meanwhile Shazia has invited Debbie, her best friend and boss, round for dinner with the intention of asking her to be chief bridesmaid at her wedding. But she hasn't counted on her dad inadvertently inviting an extra guest.

The family-based sitcom set in Birmingham returns for a second series.

Mr Khan tries to enjoy a relaxing bath on his day off with little success.

Mrs Khan has some difficulty convincing Shazia they won't embarrass her at the wedding.