Mr Khan is, obviously, the natural choice to front a new promotional video for the mosque. Or so he believes. Manager Dave, however, has different ideas.
Preview clip 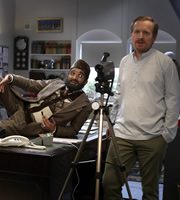 Mrs Khan is having a makeover but her husband is not impressed - new dresses cost money.

He only has eyes for the promotional video Dave, the mosque manager, is making to promote the mosque in the local community. Mr Khan thinks he is the perfect person to star in the video. He is, after all, a fine example of Pakistani manhood.

Dave, however, has other ideas, and wanting to promote a more modern image of mosque-goers, he chooses Sajid, an attractive, 'metrosexual' friend of the Khan family. Khan decides if you can't beat 'em, join 'em and goes to extreme lengths in order to prove to Dave that he's modern and metrosexual too.

What he hasn't realised is that Sajid is home alone with Mrs Khan, and the reason for her makeover suddenly becomes blindingly clear. He rushes home to confront the pair, but is not prepared for what he discovers when he arrives.

Mr Khan is the ideal candidate for the cover of the Annual Mosque Magazine.