With so few men around, Cecil becomes paranoid that he is being systematically emasculated. Outraged, he decides to take matters into his own hands and prove his manhood once and for all. 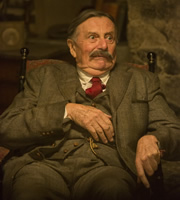 Cecil finds an ally in Constance, a sympathetic friend who understands just how serious an affliction fallen foot arches can be. It's a shame, then, that Cecil is a bit distracted this week. With so few men around, he's convinced he's being systematically emasculated and, thus, is on a mission to assert his manhood once and for all.

Despite hating everything that the boys stand for, the Headmaster visits the cottage in search of some male company and gets on so famously with Bert that he asks him to cover for George - who is striking over the removal of German from the curriculum. Bert's leftfield approach to teaching proves a hit, not only with the kids but also with Winky, much to George's dismay.