The boys are immediately suspicious when, out of the blue, a pretty girl named Penny asks Cecil to be her boyfriend. Maybe, just maybe, she thinks Cecil is a catch. Or, she's got an ulterior motive. 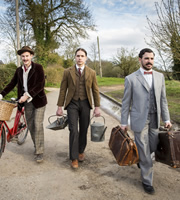 Back at the cottage, Bert crosses the line one too many times and, following an incident involving a lack of toilet paper and a poem George had written for Winky, finds himself out on his ear.

Alternative living arrangements are soon made, though, with Bert becoming the proud homeowner of a rather extravagant abode. It's just a shame it belongs to a serving soldier.

Dedicated to the cause, the ladies of Rittle-on-Sea also step up their hate campaign against the trio by implementing a 'noise rota'.