It's Bonfire Night and the women of Rittle-on-Sea are struggling to decide who should be the Guy they burn, whittling their options down to three.
Preview clip 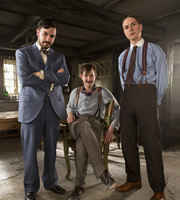 It's 1914, the Great War rages, millions of men have shipped off to join the fight, yet in the sleepy English village of Rittle-on-Sea, three young chaps, Cecil, George and Bert, have stayed behind.

Cecil would love to have earned his battle stripes and has all the makings of a brave soldier, but isn't physically fit to fight on account of his flat feet. Pacifist teacher George, on the other hand, has no intention of being a part of the conflict because he fundamentally disagrees with it, and Bert, well, he hasn't got a clue what's going on, an outstanding liar and unscrupulous cad who should be in the army and has no legitimate reason not to be.

Lumping the boys together and labelling them cowards, the ladies of Rittle-on-Sea are none-too pleased about their decision to stick around, including Cecil's sister Agnes and Winky, George's increasingly embarrassed fiancée.

It's Bonfire Night in this opening episode and the women are struggling to decide who should be the Guy they burn, whittling their options down to three.

In the meantime, Cecil is forced to join the Needlework Guild to demonstrate his commitment to the war effort, which, in turn, prompts an annoyed George to step up his anti-war activities. Bert and Agnes also come to a mutually-beneficial arrangement.

As the Great War rages, our nation's heroes are fighting the good fight on foreign soil. But in one sleepy English village, three fellows remain...