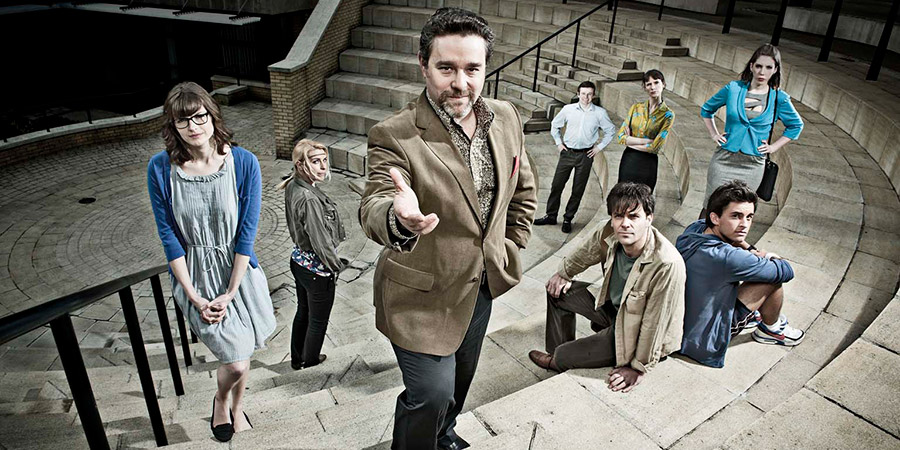 Campus is set in a fictitious 'new' university and explores the lives and souls of a handful of people that work there - some as academics, some simply involved in the general running of the place.

With a semi-improvised feel, Campus features an ensemble cast, and is made by the team behind Green Wing and Smack The Pony, including producer Victoria Pile.

At the helm of Kirke University is stubby, mercurial Vice Chancellor Jonty de Wolfe, who wants nothing more than to drench the uni in the juices of his own greatness.

As a scary cloud of financial doom hovers over the gently crumbling 60s concrete, Jonty attempts to pimp up Kirke in any way he can, whether it's faked alumni, kidnapped prodigies or a range of "Eau de Kirke" perfumery - but his lofty plans soar as gracefully as a porky tortoise and while the strangely unsettling puppet master plunges deeper into the pickle jar, the rest of Kirke's assorted staff get sidetracked by the more urgent dilemma of who to sleep with next.

The philandering English Professor Matt Beer is forced to up his game in all departments, as he makes no impression on shy Maths lecturer Imogen Moffat, who herself is consumed with creative agony over expectations of a follow-up to her hit Mathsbuster. He is left to contemplate his rapidly greying pubes while his younger, bouncier, athletic student sidekick Flatpack - who combines a six-pack body with the intellect of a piece of Ikea furniture - makes more headway with the lovely maths boffin. The gawky mechanical engineer Lydia 'big s**t' Tennant, the three Graces of Admin (Big Grace, Pretty Grace and 'Was Once A Man' Grace), Jason the reticent accountant and Nicole the feisty accommodations officer add more sexual confusion to the mix.

Production company
Also known as
Soundtrack
Soundtrack to the show composed by Jonathan Whitehead, as Trellis.
Laugh track
None