In 24/7 News, both presenter and on-scene reporter are finding it difficult not to replicate the accents of those they are interviewing and discussing in the news stories they're covering. 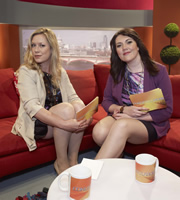 This week, Ignition HQ face another major blow to the business as they discover a rival car wash company has been operating close by undercutting them on price and taking away potential customers.

This rival 'company' is in fact two young boys who are washing cars to earn pocket money. To ensure they don't pose any further threat Bex has decided to re-mortgage her house and offer the children £46,000 for a major stake in their company.

In today's episode of Congratulation it's time to say a special congratulation to one of the viewers in person. Hosts Jacqueline and Susan are joined by guest Patrick who's not only successfully bought a new jacket from Topshop but was also recently stood in a queue behind Vernon Kay!

Lee Mack makes another special guest appearance as a camp senior medical consultant in German hospital drama Leben Ist Das Leben and in 24/7 News, both presenter and on-scene reporter are finding it difficult not to replicate the accents of those they are interviewing and discussing in the news stories they're covering.

Somewhat unconventional and unhygienic princesses Joanna and Frida make an appearance at The Royal General Hospital to mark its opening.

Then we head to a focus group doing research for a local travel agent. The individuals have been asked to feedback on a slideshow of pictures - one of which doesn't really seem to bear any resemblance to the topic of holidays.