One room, three contestants but only one can walk through 'The Door' - presenter Eamonn Holmes is this week hosting a tense TV game show. 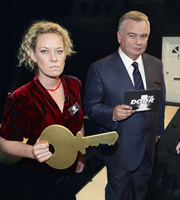 Also this week, we visit a popular German TV sitcom about a group of friends who often get together in a coffee house to sit and chat about their lives - no not Friends, Das Michael.

Then its crunch time for the employees of Ignition. They are holding yet another emergency meeting as the company is making no money due to the fact they've only washed one car in two months... that car being one of their own.

Star of stage and screen, Bridget Eccles, is once again heavily relying on her assistant to help her string a sentence together at her latest book signing. Bridget attempts to recall some of her most famous lines to her fans who've come down to visit - but isn't very successful.

In The World's Most Annoying Numbers we're taking a look at numbers 3 and 70. Big Brother winner Craig Phillips didn't used to like the number 3 but actually he's decided to change his mind and Professor of Psychology, Geoff Beatie, thinks a lot of the issues we have with the number 70 can stem from childhood.

Finally, have you ever tried to avoid those irritating street charity workers who're often in your face and overly friendly in a desperate bid to get you make a donation? Well one unlucky passer by finds it virtually impossible as Anna and Katy stop at nothing to get him to sign up to their charity.