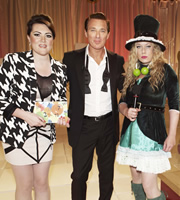 This episode sees a special guest appearance from actor and singer Martin Kemp as he joins Anna and Katy on German lottery show Zaturday Luckballs. Martin's on the show to plug his new album as well as help the hosts draw the lucky lottery balls... although Martin's in for a bit of a surprise when he realises just how many lottery balls are drawn in the Zaturday Luckballs draw.

We then head back to the Ignition HQ where new intern Andy learns that there's no 'I' in team and we take a look at some of The World's Most Annoying Colours which this week features z-listers giving their opinions on the colours yellow and taupe.

In Rice Britannia, contestants are getting ever closer to reaching their dream prize and they've been challenged to push the boundaries of creativity by making art out of rice. Anna and Katy face the tough decision of critiquing each bowl. Also this week we get to meet coppers Lucy and Sonya who demonstrate just how powerful the long arm of the law can be - literally.

Finally, we're introduced to star of stage and screen Bridget Eccles who more often than not relies on the help of her stage assistant to help remember her lines. Bridget appears somewhat intoxicated when invited onto Ruby Wax's chat show Wax Chats to promote her new film Memory Lane.