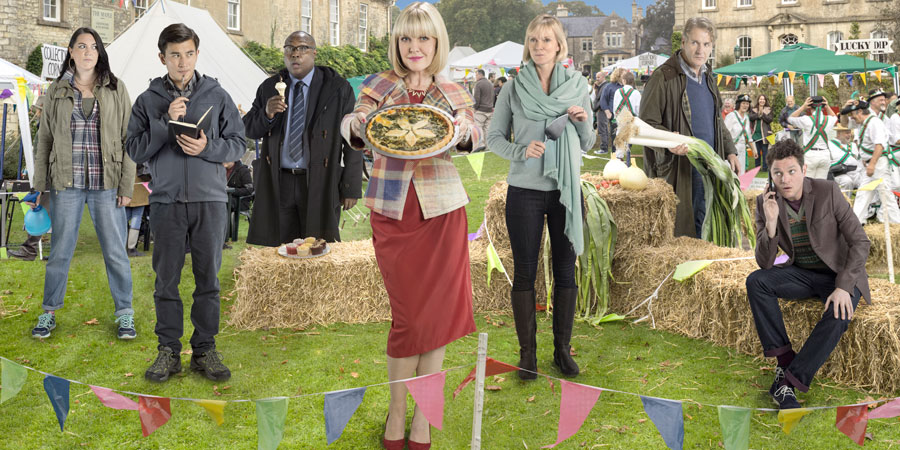 It's all about the quiche this Christmas in a tasty whodunnit starring Ashley Jensen as Agatha Raisin, a PR whizz caught up in a murder mystery.
Preview clips

Agatha Raisin, PR whizz, gives up her successful life in London, landing with a bang in the quiet village of Carsely with hopes of beginning a new dream life.

Bored, lonely and used to getting her own way, Agatha finds that life in the Cotswolds isn't quite the picture-perfect existence she imagined... and when her highflying city attitude is met with puzzlement and suspicion from country locals, Agatha enlists the few allies she can find.

Among them are DC Bill Wong, a lovelorn local policeman, Gemma Simpson, her suffer-no-fools cleaning lady, and Roy Silver, a faithful former assistant from London. But with her unique brand of feisty truth telling finding little favour, it seems the community is not quite ready for the acerbic Agatha.

In an attempt to ingratiate herself, Agatha enters the annual quiche making competition and inadvertently becomes a suspect in a murder case. As her reputation sinks ever lower, and any hopes of romance with her dashing ex-Army neighbour James Lacey swiftly thwarted, Agatha has no choice but to clear her name and earn the respect of her fellow villagers. Determined to wring out the truth, Agatha sets about solving the mystery of the quiche of death.

Agatha Raisin and the Quiche of Death - Trailer

Agatha Raisin and the Quiche of Death, coming to Sky1 this December, is a crime-based comedy drama starring Ashley Jensen.

Agatha Raisin and the Quiche of Death - Trailer 2

Who is going to win the competition?

The cast talk about the Wiltshire location of their set.

A discussion about how the book has been adapted for the TV series.

Who is Agatha Raisin? The cast and crew tell us a bit about her.

Ashley Jensen and the cast of Agatha Raisin give us some insight as to what Agatha gets up to in the Cotswolds.

Agatha anxiously waits for her former assistant Roy to arrive to Carsley, her new home.