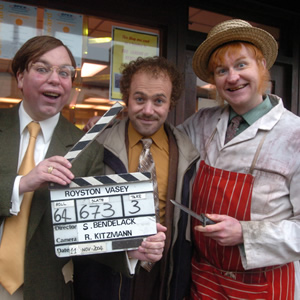 The League of Gentlemen are to reunite for a one-off charity fundraising gig.

The Royal Free Rocks With Laughter gala on the 1st December will see Mark Gatiss, Steve Pemberton and Reece Shearsmith perform together in a live environment for the first time in a number of years.

Royal Free Rocks With Laughter has been timed to coincide with World AIDS Day, with funds raised going towards a new immunity unit at The Royal Free Hospital.

Shearsmith caused great speculation on Wednesday about a possible reunion of the sketch team when he tweeted a picture of the group alongside the words "There might be some news about these people - coming soon. Keep em peeled." It has now been confirmed the group will form part of the star-studded line-up for the charity gig at the Adelphi Theatre in London.

Stand-up stars including Jo Brand, Julian Clary, Harry Hill, Lee Mack and Tim Vine will also perform, with the organisers saying other big name celebrities are still to be confirmed.

The event is being produced by Geoff Posner and David Tyler for Pozzitive Productions and Phil McIntyre Entertainments. The TV and radio producers last put on a benefit show on World Aids Day in 1998. Hosted by Stephen Fry, Live from The Lighthouse was a big success. 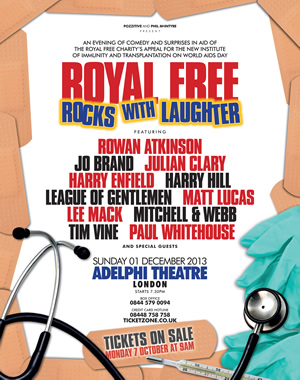 Geoff Posner says: "This is the fourth benefit Pozzitive have organised around World AIDS Day. 15 years ago we thought the problem of HIV and AIDS would go away and we wouldn't need to do any more benefits. But we were wrong. Although medication exists to fight the disease, it is still on the increase, and a large percentage of sufferers don't have access to them. So we have to find a cure. The new Unit for Immunity, Infection and Transplantation at the Royal Free aims to develop vaccinations, gene therapy and cell therapy to target chronic infections, such as HIV, and, even, in the long-term, cancer. That's why we want to help them on their way."

Despite having only just been announced, excitement for group's appearance at the gig is already growing on Twitter. The group became well known via Radio 4, before transferring to BBC Two for three series of The League Of Gentlemen between 1999 and 2002.

The on-screen group recently reconvened to record sketches for hit CBBC sketch show Horrible Histories, but are mainly now working independently. Dyson is working as a Script Editor on shows such as Blandings and Bad Education, whilst Gatiss is now heavily involved in hit BBC dramas Doctor Who and Sherlock.

Pemberton and Reece Shearsmith are still collaborating together. Having previously created Psychoville, they are now working on a new show for BBC Two called Inside Number 9 (pictured). The horror-based comedy will premiere early next year.

Below is a classic clip from The League Of Gentlemen in which Pauline discovers she has a rival: