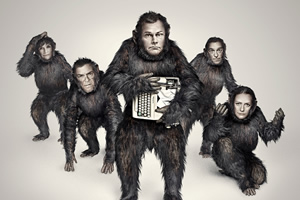 Andy Hamilton, Guy Jenkin, Neil Pearson and Paul Schlesinger - the directors of Power Monkeys - discuss how they write and film the show so close to transmission.

A brilliant satire on the commercialisation of news in the era of Rupert Murdoch and Robert Maxwell, Drop the Dead Donkey must surely have been an inspiration behind W1A (2014-) in its targeting of mind-boggling managerial interference.

How Radio 4 is bringing Tony Hancock back to life

The BBC is remaking lost episodes of Hancock's Half Hour - thanks to Harry Secombe's son.

Radio 4 has confirmed that it has ordered a third series of The Missing Hancocks, the programme which recreates lost episodes of Hancock's Half Hour.

When actor Neil Pearson found a stash of lost Hancock's Half Hour scripts, he knew he had to revive these forgotten gems for a new audience.

Neil Pearson plans to bring his comedy hero back to life at this year's Edinburgh Fringe Festival.

I'm guessing I wasn't the only one who died a little at the thought of this programme. While the discovery of lost episodes is intriguing, the thought of another actor stepping into a hero's shoes usually fills fans with dread -- especially when that hero is the still very much-loved Tony Hancock.

That said, Kevin McNally is quite wonderful here as The Lad himself in this first of five episodes re-recorded to mark the 60th anniversary of Hancock's Half-Hour. Producers Ed Morrish and Neil Pearson have resisted the urge to tinker even slightly with the script and it's testament to the genius of writers Galton and Simpson that the words still sparkle.

Bringing Hancock's Half Hour back to life

Neil Pearson explains how he came to resurrect lost episodes of Hancock's Half Hour with its celebrated writers.

A script for the fourth episode of the 1955 Hancock's Half Hour show catalogued along with those for and by the likes of Spike Milligan and Peter Sellers. The scripts are being released by comic actor and rare bookseller Neil Pearson (Drop the Dead Donkey, Brian Gulliver's Travels).