Rose Matafeo's Edinburgh Comedy Award-winning stand-up special Horndog is to air on the BBC this month, as the comic prepares to shoot the second series of her sitcom Starstruck, British Comedy Guide can reveal.

Horndog, which won the 2018 Fringe award for Best Show, was recorded at London's Ambassador Theatre last January for HBO Max in the US but will now screen on BBC One and BBC Three late in February, with an exact date still to be confirmed.

The Kiwi comic's profile is currently at an all-time high with last month's release of pregnancy comedy Baby Done on streaming platforms, her debut lead role in a film, opposite Harry Potter star Matthew Lewis.

Meanwhile, BCG understands that Starstruck, in which Matafeo plays Rose, a twenty-something juggling two dead-end jobs in London whilst navigating the awkward consequences of accidentally sleeping with a film star, will also air on the BBC and HBO Max this spring, with a second series recording later this year.

Joining Matafeo in the cast are Alastair Roberts (Stath Lets Flats), Emma Sidi (Pls Like), Jon Pointing (Plebs), Tessa Coates (The Other One), Matthew Jacobs Morgan (Enterprice), Ambreen Razia (The Emily Atack Show), Nadia Parkes (Doctor Who) and Joe Barnes of sketch duo Goodbear, with other casting yet to be revealed.

Last year, Matafeo, who is currently appearing in E4's gamer sitcom Dead Pixels, revealed that she was writing a second series of the six episode half hour sitcom with her long-time collaborator, fellow comic Alice Snedden, before the first had even aired.

She told another Kiwi comic on his podcast, James Nokise's Eating Fried Chicken In The Shower, that when filming was postponed from March 2020 because of coronavirus, "the producer came out of a meeting and was like 'so, little change of plans, we are shifting all of the filming to October and you are going to write a second series of the show'".

The sitcom, which is made by her management company Avalon (Catastrophe, Taskmaster), will launch on BBC Three and HBO Max in the US simultaneously, with broadcasting rights also sold to ABC in Australia and TVNZ in New Zealand. 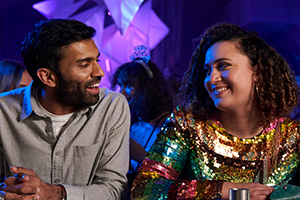