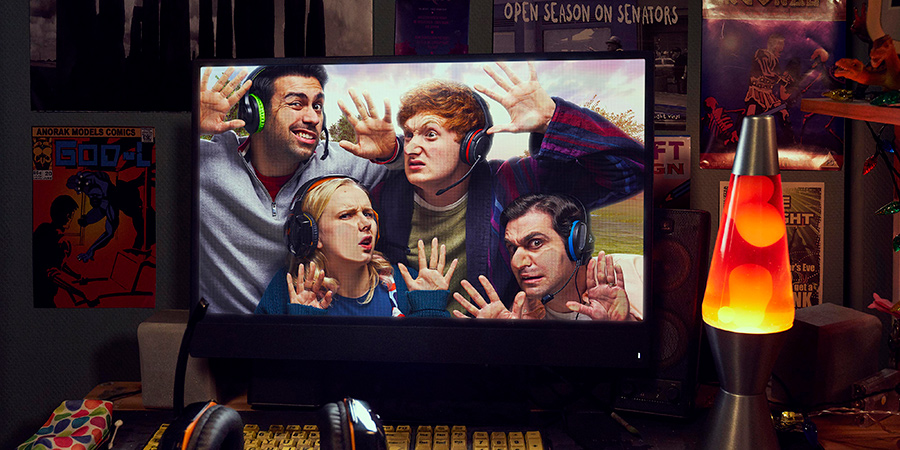 Comedy about mates Meg, Nicky and Usman, whose world revolves around a role-playing computer game

Dead Pixels centres on mates Meg, Nicky and Usman, whose world revolves around their obsession for the massively popular fantasy RPG[1] Kingdom Scrolls - a mystical, magical and, more importantly, virtual world of wizards and wyverns....

However in real life Meg and Nicky work in an office. They are not sure what Usman does for a living (though apparently it's also something responsible and probably something involving spreadsheets). But they all have their priorities straight, especially Usman.... If Castle Blackfinger needs defending from a bunch of marauding orks then grabbing a decent night's sleep would not only be selfish, it would be downright irresponsible.

An unusual mix of on-screen live-action and computer animation, Dead Pixels is AAA[4] and split equally between the characters real lives and their online domain inside Kingdom Scrolls, which means FMV[5], SLI[6], and other cool stuff go and take a double jump[7].

[1] That's 'Role Playing Game' to non-gamers.
[2] A person who is inexperienced in a particular sphere or activity, especially computing or the use of the Internet.
[3] This is an actual gaming term for something else, but in this instance we twisted its definition to mean 'fancy'.
[4] Apparently gaming industry talk meaning 'impressive and amazing'.
[5] Full Motion Video.
[6] Scalable Link Interface.
[7] A second jump in mid-air, while your Avatar is in motion.