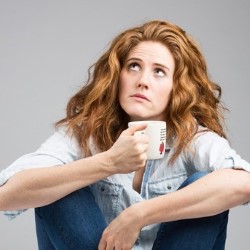 Having won the Comic's Choice Award at the Melbourne Comedy Festival, multi award-winning comedian Sarah Kendall is back with a new hour of storytelling. In this hour-long narrative, Sarah's story will take audiences back to a pool party she went to in 1989 that was so disastrous that the ramifications are still being felt today. It was a pretty bad pool party. 'Kendall is a thoroughly captivating teller of an expertly constructed story' **** (Chortle.co.uk). 'Kendall's intensity keeps the audience gripped all the way' **** (Fest). 'Fiercely funny' (Observer).

In 1989, one of Sarah Kendall's best friends died for exactly eleven seconds. A Day In October is a story about the insights the boy developed into life and death, and the remarkable effect those eleven seconds had on Sarah and her schoolmates.

Another rollercoaster narrative with a fierce twist, Sarah paints vivid portraits and weaves intricate tales with the ease. But most importantly, she raises mighty laughs along the way.